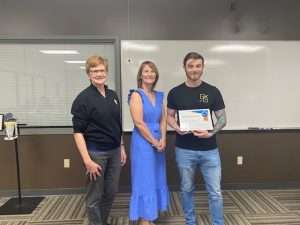 Congratulations to Louis Logan, II for receiving the Missouri Regional Breaking Traditions Award for MACC presented by the Department of Elementary and Secondary Education.

The Breaking Traditions Awards recognize outstanding students in nontraditional career programs (a student in a career field that is least represented by their gender).  He was nominated by his professor, Carisa Atkins.

One area that Carisa Atkins noted in her nomination letter was her pride in seeing him take the time during his clinical setting hours with the patients.  “In the clinical setting, he spent hours just sitting and talking with the veterans that wanted to share their stories with him.  He quickly became confident in his clinical performance and skills.  He is able to connect with clients in a way that is caring and compassionate.”

Louis plans to continue his education after completing his Associate Degree Nursing Program at MACC, but for now, he is taking his program ‘one semester at a time.’ 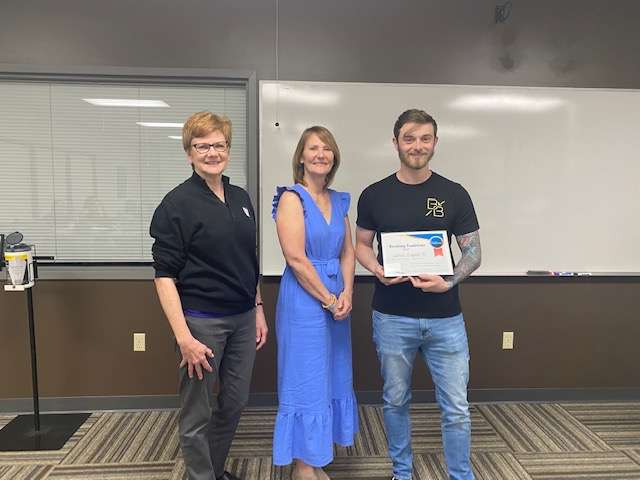 “MACC’s nursing program was difficult, but the instructors really care about the students. They told us, ‘We don’t want average people taking care of us, so we’re making sure you’re exceptional nurses.’ And we are!”

When Quenna Kovar awoke in the ICU after being life-flighted from a car wreck, it just so happened that her nurse was an MACC alum. In the haze of her pain, she remembers quite clearly being excited to watch the nurse caring for her injuries knowing that she would be starting the MACC Associate Degree Nursing Program in just a few months and that someday she would be returning the favor to her own patients. That was in 2007 and Quenna Kovar made good on her promise to return the favor. She is now a circulating nurse in the Operating Room at Boone Hospital and one of her main jobs is patient advocacy. She educates patients about their procedures, sits with them through out the surgery and cares for them post-op.

“I had an awesome nursing instructor at the Columbia Career Center that really made nursing real for me,” she said.

Using her CNA license, Quenna got a job at Boone Hospital as a nurse tech. She worked with nurses and learned what they did on a daily basis. Watching them administer meds and care for patients fueled her desire to continue her education.

Quenna chose Moberly Area Community College because she was an A+ student from Hickman High School. She basically earned her nursing degree for free through that scholarship. MACC was also close to home for her. She attended the Columbia location for her general education classes and then commuted to Moberly for the actual nursing program.

MACC’s Allied Health Programs are notoriously difficult. And Quenna’a experience was not unique.

“The curriculum was very difficult, but it made the transition from nurse tech to RN very easy. Over the course of the program, we took hundreds of difficult tests, however at the end of the program when we had to take the big NCLEX exam, it made it less stressful. And I passed on the first time,” Quenna explained.

“So if you’re excited about going to nursing school, it’s worth it. All of the hours and the tests and everything you put into it is definitely worth it when you’re sitting there with your patient, holding their hand telling them it will be okay, telling them what to expect in surgery and afterwards, and teaching them how to take care of themselves when they go home. The gratitude the patient and family gives you makes it all worth it,” said Quenna.

Quenna and many of her fellow MACC Nursing Program alums that work at Boone Hospital are in the process of earning their Bachelor’s of Nursing at area four-year institutions.

“The instructors in MACC’s Nursing Program really do care about the students. They told us, ‘We don’t want average people taking care of us, so we’re making sure you’re exceptional nurses.’ And we are!” commented Quenna. 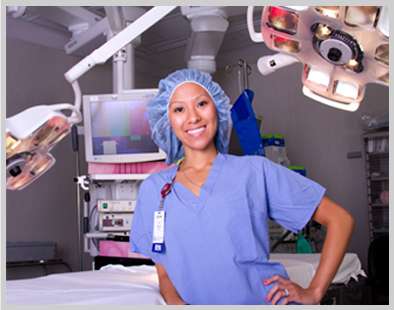 Learn more about our Associate Degree in Nursing

“My job is simply to restore my patients’ dignity. I give them independence, and in return they give me an exciting reason to come to work everyday.”

Tina Montgomery is a classic case of corporate downsizing being a blessing in disguise.

Tina earned her bachelors in physical education, but somehow ended up owning video stores and working in the banking industry instead.

At the age of 24, Tina watched her mother lose her battle with cancer. During the treatment process, she witnessed Occupational Therapists working with her mother to provide her with tools to give her dignity and a better quality of life. Tina was fascinated and forever changed by this experience.

After her mother’s death on March 18, 1986, she and her sister began a volunteer hospice program in her memory. The Fitzgibbon Mary Montgomery Hospice is still a non-profit hospice that is part of the Fitzgibbon Hospital in Marshall, MO today. It was one of the first hospice centers in the state of Missouri to receive Medicare certification in 1993 and is highly respected in the region.

Tina spent the next 17 years in banking working in nearly every position available. Unfortunately, she ended up a mortgage loan officer in 2009 when the housing bubble burst and was downsized rather quickly.

By that point, Tina was a breast cancer survivor herself, a single mom with a 11-year-old son and she decided it was time to quit daydreaming about being an Occupational Therapist and find a program to enter.

She found MACC’s program through the Missouri Health Professions Consortium on our website and eagerly began classes. Tina graduated with the Consortium’s first OTA class in 2010 and has been in heaven ever since. She is now changing lives and restoring dignity and quality of life everyday to the patients at Golden Living Rehab in Mexico, MO.

One of her special patients, Frank Kramer, 86, said, “Before Tina, I was a quadriplegic looking for a way to do myself in. I just wanted to die. She worked with me for hours a day and gave me many stern talks about how I could make it. Now I’m walking and moving just like the next guy.”

Tina is giving people a reason to live, and they are giving her the joy she has been longing to have everyday since 1986. Tina gives back to the OTA program every year, by speaking to prospective and current students, assisting MHPC with the interviewing process. 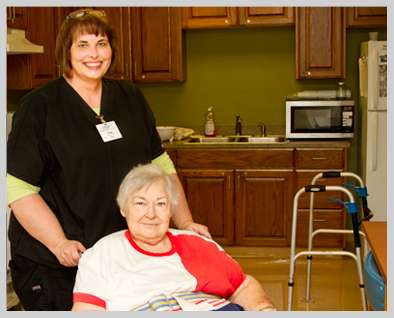