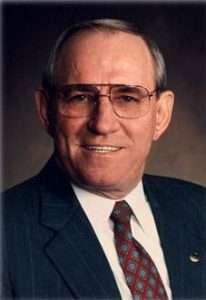 Dr. Andrew Komar, Jr. is President Emeritus of Moberly Area Community College. Dr. Komar gave over 25 years of dedicated service to MACC, twenty of those as president. Under his leadership, the College evolved from a struggling junior college with just a few hundred students to a true community college with modern facilities and new buildings to meet the needs of the continuously growing student population.

Many changes occurred during Dr. Komar’s tenure. With the growth of new students, the need for many new programs and services as well as additional facilities was fulfilled. The Fine Arts Wing was constructed as an addition to the Main Building. The Career Center was expanded making space for more classrooms and offices. Construction of a women’s dormitory, bookstore, and maintenance building was also completed. Dr. Komar also ushered in the Information Age at the College by introducing computers into classrooms and offices, and envisioning the creation of a multimedia center that would enhance instruction through interactive learning experiences and offer the capacity for distance learning. Near the end of his presidency, the design and construction was approved by the Board of Trustees for the Activity Center. This facility has proven to be an important venue for Greyhound basketball games and other events in northeast Missouri. With the addition of these facilities, the physical attributes of the campus as well as the quality of instruction were greatly enhanced.

One of the buildings completed on the MACC campus during Dr. Komar’s presidency was College Hall. It houses Student Affairs, the President’s Office, and math and science classrooms and labs. When Dr. Komar retired in 1996, he was named President Emeritus by the Board and College Hall was renamed Andrew Komar, Jr. Hall.

Another highlight of his career at MACC was the accreditation of the College in 1980 by the North Central Association, the regional accrediting agency. Throughout his career and even after his retirement, Dr. Komar has worked on behalf of all community colleges in Missouri. He was responsible for originating the legislation that established the community college taxing district, an effort that resulted in a permanent funding source for community colleges. He has also worked with legislators on other projects to improve funding for the community college system. Dr. Komar has received many honors and awards during his tenure and in 2006 was given the Mel Carnahan Award by the Missouri Community College Association in recognition of his work in support of community colleges both at the local and state levels. Dr. Komar’s legacy will be remembered for his vision of what Moberly Area Community College could become and his promotion of that vision into reality. 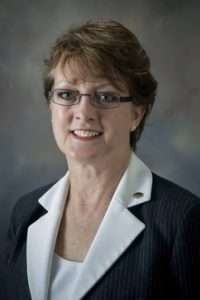 Dr. Evelyn E. Jorgenson began her career at Moberly Area Community College in 1986 as an Adult Basic Education Teacher-Trainer. She was the first Director of Personnel and later became the Assistant to the President. In 1995, she was promoted to Vice President, becoming President of the College in 1996. Upon her retirement from the College in June 2013, the Board of Trustees awarded her President Emeritus status in honor of her 27 years of service to the College.

During her 17-year presidential tenure, MACC responded to regional demands for affordable higher education, bringing higher education centers to Mexico, Hannibal, Kirksville and Columbia, as well as introducing the online degree and study-abroad program. The student body grew with the expansion, with over 5000 students attending each semester. The College built new facilities such as the McCormick Residential Center in Moberly, expanded into the Parkade Center in Columbia, and broke ground for the off-campus center in Hannibal. She led two exceptional Higher Learning Commission reaccreditation visits, and with her guidance, the College has contributed to the economic vitality and the growth of nearly every community in its service region. It has achieved success in dual credit programs and has built university collaborations that changed the course of generations of students to come. Upon her retirement, Dr. Jorgenson held the longest tenure in office of any the twelve community colleges in the state of Missouri.

One of Dr. Jorgenson’s legacies as president was the promotion of the Arts. In 2002, the MACC Coliseum was remodeled to provide a gallery, updated classrooms, and studio space for the Graphic Arts and Fine Arts programs. She introduced the Endowment for the Arts to promote cultural events and artistic projects at the College on its campuses and in the communities it serves throughout central and northeast Missouri. Throughout each semester, Dr. Jorgenson could be found at a poetry slam in the Gallery or on the front lawn, creating chalk drawings at Art on the Block. In recognition of her extensive support of the Arts, the Board of Trustees named the Graphic/Fine Arts wing the Evelyn E. Jorgenson Graphic Arts Fine Arts Center in 2013.

Dr. Evelyn E. Jorgenson had her first community college experience in Sedalia, Missouri. She earned her Associate of Arts Degree from State Fair Community College before moving to Columbia, Missouri to pursue her Bachelor’s of Fine Arts Degree at Columbia College. Even before completing her Bachelor’s Degree, Dr. Jorgenson began working in Adult Basic Education for Columbia Public Schools, including serving as interim director for that program. Her experiences in adult education inspired her to further her education in this field. She completed her Master’s and Doctorate Degrees in Higher and Adult Education at the University of Missouri.

Dr. Jorgenson earned many honors and awards in the course of her career. State Fair Community College honored her as a Distinguished Alumni and Columbia College presented her with a Professional Achievement Award. Additionally, she has been honored twice by Phi Theta Kappa as a Distinguished College President. In 2004, she received the Women Legislators of Missouri Deverne Lee Calloway Award for outstanding dedication to the field of education.

Throughout her career, Dr. Jorgenson has been passionate about the contributions of community colleges. She served the American Association of Community Colleges (AACC) as a member of the Rural Policy Roundtable and the Commission on Academic, Student, and Community Development. She also serves on the board of the AACC President’s Academy. She was President of the Council of North Central Two-Year Colleges and the Missouri Community College Association Presidents’ and Chancellors’ Council. She served as the Chairperson of the statewide Committee on Transfer and Articulation and in 2009 was appointed by Governor J. Nixon to serve as a commissioner for the Midwestern Higher Education Compact.

During her time in Moberly, Dr. Jorgenson was also active in the community. She was a member of the Moberly Rotary Club, serving as President of that organization from 2004 to 2005. She served on the Boards of Directors for the United Way of Randolph County and Commerce Bank. In addition, she was the Chairperson for the American Heart Association’s first Go Red for Women event in Moberly.