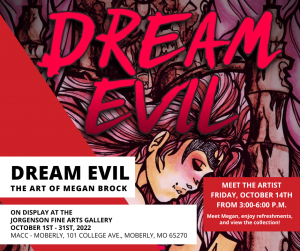 During the month of October, the Jorgenson Fine Arts Gallery will host Dream Evil, an exhibition by MACC alumna Megan Brock. Dream Evil is Meghan’s first gallery show, and it is sure to be a thrill.

Public viewing of the artwork will be available during MACC-Moberly’s regular business hours October 1-31, 2022.

When Megan Brock was a child she was terrified of the monsters that lived in the VHS boxes at her town’s local movie rental, The Movie Connection. The horror movie aisle was right next to the kid’s movie aisle and she would have to turn the horror movies around so the monsters couldn’t see her. Megan was so scared a monster might reach out of their box and grab her and then drag her back into their world!

It would take some years, but Megan would come to befriend the monsters in the VHS boxes, even allowing them to reside in her own home in a collection of some of the most wonderfully frightening movies birthed from the 80’s.

“I befriended the monsters and learned everything about them. I learned about vampires and werewolves and zombies! I learned about Vincent Price and Lon Chaney and Boris Karloff and not only did I make room in my heart for these nightmares, I even gave the monsters in their VHS houses a home right on a shelf in my room.”

Megan was greatly inspired by artists such as Stephen Gammell, the man behind the original illustrations of the Scary Stories to Tell in the Dark series and of course Millicent Patrick, the woman who designed the classic Gillman from Creature from the Black Lagoon and Michael Turner, the DC and Marvel artist who drew the comics she loved in middle school such as Witch Blade and Fathom.

“Turner’s illustrations were incredible! I couldn’t help but pick up a few tricks from his comic books! I loved how it felt drawing pretty girls in leather jackets and werewolves with dripping fangs, it was scary trying something new but exciting too. I hope you enjoy viewing these pieces as much I did creating them!”

Dream Evil is the artist’s first gallery show and was named after her favorite Heavy Metal singer Dio’s song by the same name. As she rocked out to Heavy Metal, Megan created a world over run by monsters, werewolves and vampires, with heroines in leather jackets and some in ballgown, daring to battle the creatures of the night.

Megan Brock grew up in Missouri and has been writing and drawing since she was a child. As an indie-author Megan has published several books for adventurous middle grade readers including, 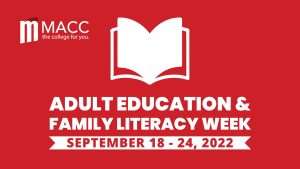 Missouri Governor Parson proclaims September 18-24, 2022, to be National Adult Education and Family Literacy Week. What is National Adult Education and Family Literacy Week? AEFL raises public awareness about the need for and value of adult education and family literacy. Its goal is to increase financial and societal support for access to basic education programs for U.S. adults with low literacy, numeracy, and digital skills. Advocates across the country use this opportunity to elevate adult education and family literacy nationwide with policymakers, the media, and the community. 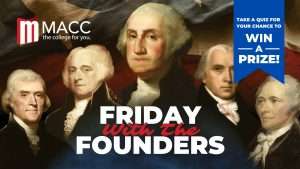 To celebrate Constitution Day this year, have some fun with this quiz over the Founding Fathers and the U.S. Constitution.  Quizzes must be taken before the end of the business day on Friday, September 16th.  Entries with all correct answers will be entered into a drawing to win some cool MACC swag.