Engineering is in Aaron Wood’s DNA. His grandfather, father and brother are all either engineers or studying to become them. So when it came to choosing a profession, it was the logical choice. The only big decision was in what field he would focus.

“When it came to picking a college, I looked at all of the options in my area within a hundred miles and each of the colleges had their own tuition rates. MACC had the most affordable plan of all the colleges so it was a pretty easy pick,” Aaron explained, “Plus they had a site in Columbia which was very close to where I live, so that became my first college experience.”

After his first semester, Aaron began taking classes at the MACC Moberly campus to focus on his pre-engineering courses. During this time, he began considering what field of engineering he would choose. Growing up, he had wanted to be a doctor. He could combine both professions through biomedical engineering.

To test this theory, he took Dr. Suzanne Martin’s biology course and that semester opened a whole new world to him. Dr. Martin asked Aaron to be her lab assistant, a golden opportunity for a guy who was considering spending his life in a lab.

His eyes light up as he explains the variety of experiments he got to perform for the first time in her lab.

“We had forestry experiments, we had mold, I mean every biological aspect you could think of. And I loved that course so much that I wanted to get more into biology…being Dr. Martin’s lab assistant truly piqued my interest in lab work. I got to do my own experiments. I got to teach some of the lab sections and lead some of the outside experiments. It was a great time and really got me involved in the lab,” he explained.

Aaron transferred to the University of Missouri-Columbia after earning his Associate of Science degree at MACC. He was awarded several scholarships, including the Stamper Scholarship, which paid for his undergraduate work at MU.

“The lab experience at MACC really gave me an introduction into what I would be working with at MU. The University of Missouri is performing cutting-edge research and in order to get into that you have to have a good lab background, and I received that at MACC,” said Aaron.

For the last several years, he has been working with Dr. Sheila Grant in the biomaterials and biophotonics lab. He will soon be published in the American College of Surgeons for his work on hernia mesh polymers. This is a huge honor because it’s uncommon for an undergraduate researcher to be first author on a published paper.

His success at MU opened the door for a paid research internship during the summer of 2012. Aaron conducted pancreatic cancer cell research at Iowa State University. His work focused on ways to detect pancreatic cancer at earlier stages with the goal of saving more lives from what is now a death sentence diagnosis.

“For future students looking at engineering as a possible career, I would definitely recommend the pre-engineering program at MACC. It’s a great introduction. You get the math, the science, the English. All of your pre-engineering classes are taken care of so when you transfer into a four-year university you already have two years of work done at a more affordable rate. I’m thankful for the investment the professors at MACC have made in my career,” said Aaron. 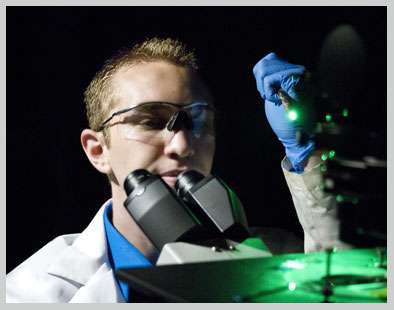